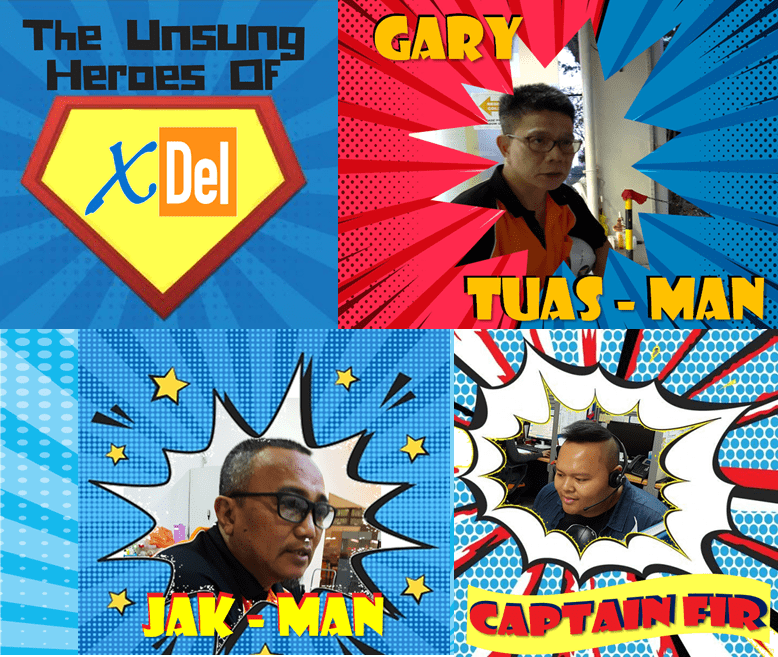 Working in the delivery service business in Singapore is nothing short of challenging – from braving rain and sun under severe traffic conditions to deliver on time, to being on the phone the entire day to take phone orders and track ecommerce job deliveries.

Bob Riley, an American politician once said, “Hard times don’t create heroes. It is during the hard times when the ‘hero’ within us is revealed,” and this cannot be truer for the many heroes and heroines who work in XDel.

As Labour Day approaches, XDel wants to celebrate and honour some of our unsung heroes, who are the everyday faces and voices that represent XDel, and whose hard work and dedication made us one of top 10 courier companies in Singapore.

A familiar face to our clients in the Tuas and Jurong area, no one knows the area better than Gary, one of the longest serving Courier Messenger, as he only delivers and picks up parcels and documents there.

For over 14 years, a regular workday starts at 4.30am and he will be at XDel’s Henderson HQ before 6.00am, to pick up his delivery jobs for the first half of the day, and then by 6.45am, he will head to Tuas and Jurong to begin his delivery rounds. He returns to HQ around lunch time to pick up his next bout of jobs and finally ends the day at around 5.30pm. In a day, he can deliver up to 80 jobs.

The hours are long and the challenges to deliver in Jurong/Tuas are aplenty but these do not deter Gary from performing his job with pride and excellence. When asked what gave him satisfaction and motivation at work, he answers without hesitation that the friendship and bond that he had built with regular customers over the years and good bosses who help him whenever he encounters problems. He enjoys the camaraderie with fellow courier messengers and being happy at work is something he values very much.

Captain Fir or more affectionately known as Fir to regular customers, is one of XDel’s customer service phone warriors, who answers all the phone orders and ecommerce delivery enquiries that come in fast and furious daily.

A big guy with a warm smile that customers can only hear from his voice but cannot see, Fir has been with the company for 3 years. On average, he takes up to 90 calls a day and when he first started, he lost his voice for a couple of days because he had never talked so much in a day. Now, he derives great satisfaction when he is able to fulfil customers’ requests or overcome a challenging situation. His service mantra? To go the extra mile to put a smile on the customer’s face.

His positive and genuine deposition to help customers have earned him loyal customers who insist on having him take their orders because he knows them by heart. And because he is willing to go the extra mile, he has received numerous testimonies from clients who recognise his excellent service.

One of XDel’s latest full time recruit, Jak-Man (whose real name is Jakaria) who joined less than a month, receives his first commendation from a customer, Lydia. In her email, Lydia wrote:
“I would like to thank your courier guy Zack for his patience and good service shown during the delivery of my parcel this morning. Hope you can retain & reward positive and helpful staff that really makes working with your company such a pleasant experience!”

A man with a serious face, that looked ready for the challenges ahead, Jakaria turned sheepish and bashful when he was told first thing in the morning that a customer wrote in to show him appreciation. To him, what the customer praised him for, was a norm thing to do. He later credited the company for providing him with good tech tools to help him perform his delivery job around Singapore efficiently so he can pay attention to giving great customer experience.

For the rest of the unsung heroes/ heroines that we have yet to feature, thank you for your contributions to make XDel a great delivery courier company in Singapore! Keep up the good spirits and great service delivery!

The courier career is not for the faint-hearted but for those who have a heart of steel with a calling to deliver excellence. Think you have what it takes to take up this challenge or know someone who does, then great rewards await at https://www.xdel.com/index.php/careers/.